Did you know that the EU took unprecedented steps towards combating hate speech in the Internet? Two months ago the European Commission together with Facebook, Twitter, YouTube and Microsoft (referred to as ‘IT companies”) agreed on a special code of conduct to fight with spreading hate speech. 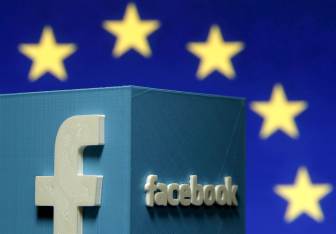 A 3D-printed Facebook logo is seen in front of the logo of the European Union in this picture illustration (Photo: DADO RUVIC / Reuters)

While ensuring freedom of expression online the EU Commission and IT companies recognized that illegal hate speech negatively affects those fighting for freedom, tolerance and badly affect democratic discussion throughout the Internet. National legislation of the EU Member States plays a crucial role on preventing illegal practices. In that view Council Framework Decision on combating racism and xenophobia has to be fully implemented in national legal systems also in the online world – which also came as a conclusion of talks between the EU and IT companies. Actions guaranteeing that online agents and social media platforms will respond quickly on valid notifications of illegal hate speech in the Internet are equally important as complying with the law – that’s why a dialogue with IT companies was needed.

In response to all the challenges arising from the use of Internet, the European Commission together with the above mentioned IT companies have agreed on the Code of Conduct on Countering Illegal Hate Speech Online. Signing the code, IT companies committed themselves on continuous development of their internal security measures and staff trainings to ensure an effective process of reviewing valid notifications – to make it possible to review such notifications in less than 24 hours, and if necessary, decide on deleting or blocking such content. IT companies will also focus on closer cooperation with NGOs, which will help in reporting of hate speech content – they also underline that creating of the code of conduct aims at sharing good practices with other companies.

Most relevant public commitments included in the code of conduct among other things are: 1) Creating transparent and effective tools of reviewing hate speech notifications by IT companies – they should also possess specific rules or guidelines clarifying prohibition of the promotion of incitement to violence and hateful conduct; 2) The IT companies commit themselves to review the majority of valid notifications in less than 24 hours; 3) Spreading of knowledge and conducting promotional campaigns on the types of illegal content by the IT companies; 4) Encouraging experts to bring their remarks and reporting content inciting to violence and hateful conduct on a wider scale; 5) Sharing good practices with other companies; 6) Cooperating with civil society organizations.

EUROpens is a blog run by students and devoted to subjects concerning European issues in a broad sense. The editorial board aims to present and comment the most curious topics from the political, economic, social and cultural life of the European Union and its Member States. The EUROpens team believes that the demonstration of the processes, which have gone in the particular Members States, and attempts to interpretation their effects in the European context will make a contribution to the dissemination of objective information about the European Union. The EUROpens’ goal is to break stereotypes functioning in Europe which were generated by this selective transmission and to enhance the European awareness by its educational activity.